It was fall in New Mexico. I pushed my bed against the wall and folded it back to its futon status. It was a symbol to myself that I wouldn't be sharing it with anyone. No one except my "Kwala" bear-- a stained relic of my childhood that still made its innocent jingle and had the important job of keeping my arms at a specific length from my chest to keep my shoulder in a good position every night. A job that had previously been held by a man's arm.

My not-so new but happily re-formed bed was donned with a bright orange bed sheet with a 2" rip near the corner. On top of the bright orange, in a subtle contrast that brought me the most comfort, was my gray duvet.

I can only imagine the life this duvet had before I found it. I nabbed it from a free pile at my second or third residential education job. It was heaped among things some other twenty-something didn't bother to pack or put away as their contract came to an end the summer before. In my care, my new duvet (which I used as a sheet) would keep me warm during the snowiest winters I had experienced (in Southern California no less!). Eventually it would act as just one more layer between cotton and quilts and wool in a 5th wheel trailer in a forest in the mountains under which my fiance and I would lie listening to the wind howl just a few feet from our faces.

My gray duvet made it out of California, back to Texas and into the uhall with all my things, to my new home in sunny New Mexico. The fiance made it there, too, but he didn't stay for long. Not like my gray duvet. I can't explain the comfort I got from the dull gray sheets, or the solid softness they provided. Or the simpleness of the big round clear buttons on one side, designed to hold something inside. But it would never reach that fate, at least not with me.

My gray duvet met a new fiance. It kept his thin body warm one week before he passed away.

My bed went back to the wall, folded, in protest of love, of sharing and of openness. I wiped the tears of vulnerability upon my gray duvet, temporarily darkening its fibers.

I purchased my first bed. I got engaged again. I got a puppy. A tear in my gray duvet kept growing until one day, I caught my toe on the rip and nearly tripped. I removed my gray duvet from my new bed, and gave it to the dogs.

It wasn't over though. For months, they played tug of war with my gray duvet. Strings, patches, and pieces littered the house in corners, on tables, in dog beds, or just hanging out of the mouth of a dog or two.

I guess eventually I picked all those pieces up, and my memory of the gray duvet faded away.

I'm now writing this under a white duvet. It's serving its purpose, holding a synthetic comforter within its sheets. It's stained with pen marks, a drop of ice cream, and some blood from my dog getting caught on barbed wire. It keeps his white hair off my gray sheets.

My bed is pushed up against the wall. Kwala sits beside me, her nose chewed off years ago by my new pup. 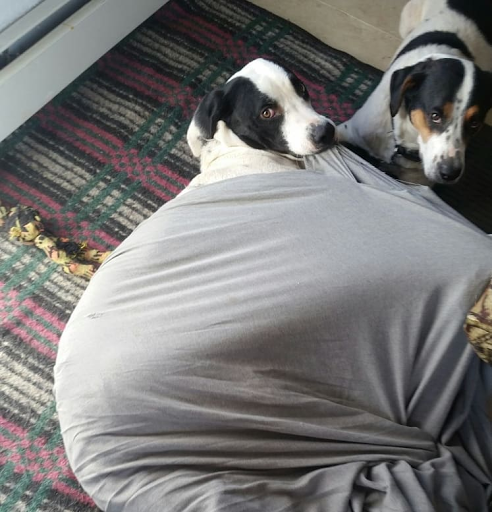 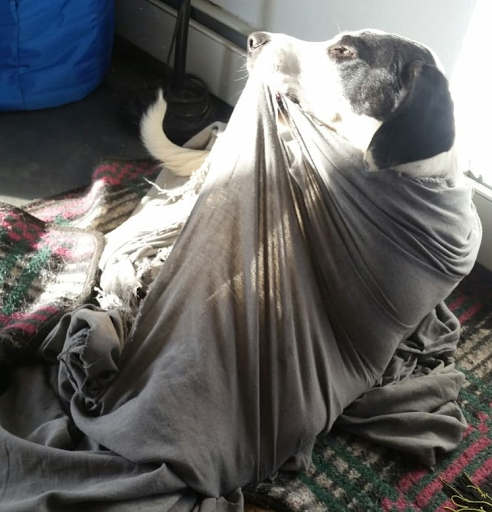 Email ThisBlogThis!Share to TwitterShare to FacebookShare to Pinterest
Labels: memories, slice of life