I have a compulsion against throwing (almost) anything away.
As a result, I have folders of paper (sorted by color), drawers of paperboard, old CD's and credit cards, meshing from fruits and vegetables, rubber bands, and many many other things that I hope to some day craft into a useful, if not beautiful piece of Sustainable Art.


DIY I'm Dying to tell you about

As I watched the lack of color on these pieces of clothing degrade into spotted tye-dye of their own this summer, I vowed that I would attempt to prolong the life of them through natural dyeing. After talking about it for several months, this week it was finally time, and the result is not just some slightly-less-noticable-stained clothing, but the knowledge and practice of using natural plants, or scraps, really, to get artsy. After reading all about natural dyes here (http://twentyfirstcenturylady.blogspot.com/2012/07/natural-fabric-dyes.html) , I picked out a few colors that I wanted that could be made with things I had access to. The onion skins looked especially promising, and a deep brown/orangey hue.
Before I did the dyeing, I tried to make my grungy clothes as white as could be- with the help of a little laundry detergent, bleach, and the sun. The instructions said to use twice as much water as material, but didn’t specific how much material. I had about two cups of onion skins, but I put 8 cups of water in, because I wanted enough for a long sleeved shirt. I also put about 2 tablespoons of turmeric in 4 cups of water.

I let the dyes boil for an hour, as recommended, then sit overnight, to compensate for the extra water I put in. The next day, it was time to ready the white with some fixative- vinegar in this case, because I’m using plant matter. For berries (like prickly pear) a salt fixative is more efficient. I boiled my pants in a pot of 1 part vinegar to 4 parts water for an hour. WARNING: When boiling a vinegar, TURN ON THE OVEN FAN. I didn’t do this for the first twenty minutes, and Dad was wandering around the hallways wondering what the smell was. Also, when taking the lid off, let the steam go AWAY from your face. Yep, vinegar is a pretty strong base. Here’s my tank in the turmeric. It started yellowing almost immediately.  The blog said just to let it simmer until you’re satisfied with the color, so I did it for another hour. That’s 3 hours of boiling time so far just for this shirt, and 3 more for the pants I did, and 2 (since I boiled the tank and shirt together in vinegar) for the long-sleeved shirt. That’s a lot of propane/stove time. When I try this over the summer, I want to try this with our solar oven. My favorite shirt in my favorite color; no matter how long I let it simmer, it never got as rich as I hoped. Probably because I over watered it—another learning note. When it’s all done you get to squeeze it out, and run it under water to let the excess dye off. I was a little hesitant in this step, and maybe left too much of the dye on—which I have to remember before I try to wash them again. I’ll admit I was eager to dry them and get my ta-da pictures, but the result is that there’s some dark yellow and faded yellow on the tank. The long-sleeved is solid, but not as deep a color as I hoped, and the pants, I did with coffee
that I decided on at the last minute…? Stilllook like dirty ol’ pants. At least the dirt-stained color is all over the
pants now, instead of in spots. Heh. The final result is….some slightly colored clothing. But I learned a lot! I’m
definitely going to try this over the summer with our kitchen scraps. We can use amaranth leaves to get a good reddish, I’m sure, and we’ll have plenty of onion skins so I can do the ratio right. I thought about using urine instead of vinegar…after all, if everything else is coming from the land, but you have to buy a big bottle of vinegar, it doesn’t seem as ‘natural’… alas, I don’t think parents would be too happy with kids coming back with urine-fixed clothing, so perhaps I’ll merely mention the possibility, and then what they do at home is their own problem.
*UPDATE* 6 months later, after washing and wearing all the products, the pants are still a very off white, the shirt is sadly back to dirty white, and the yellow is still the same, though I've only washed it once and when I wear it, it smells of turmeric. Time to try more dyes**
_________________________________________________________________ 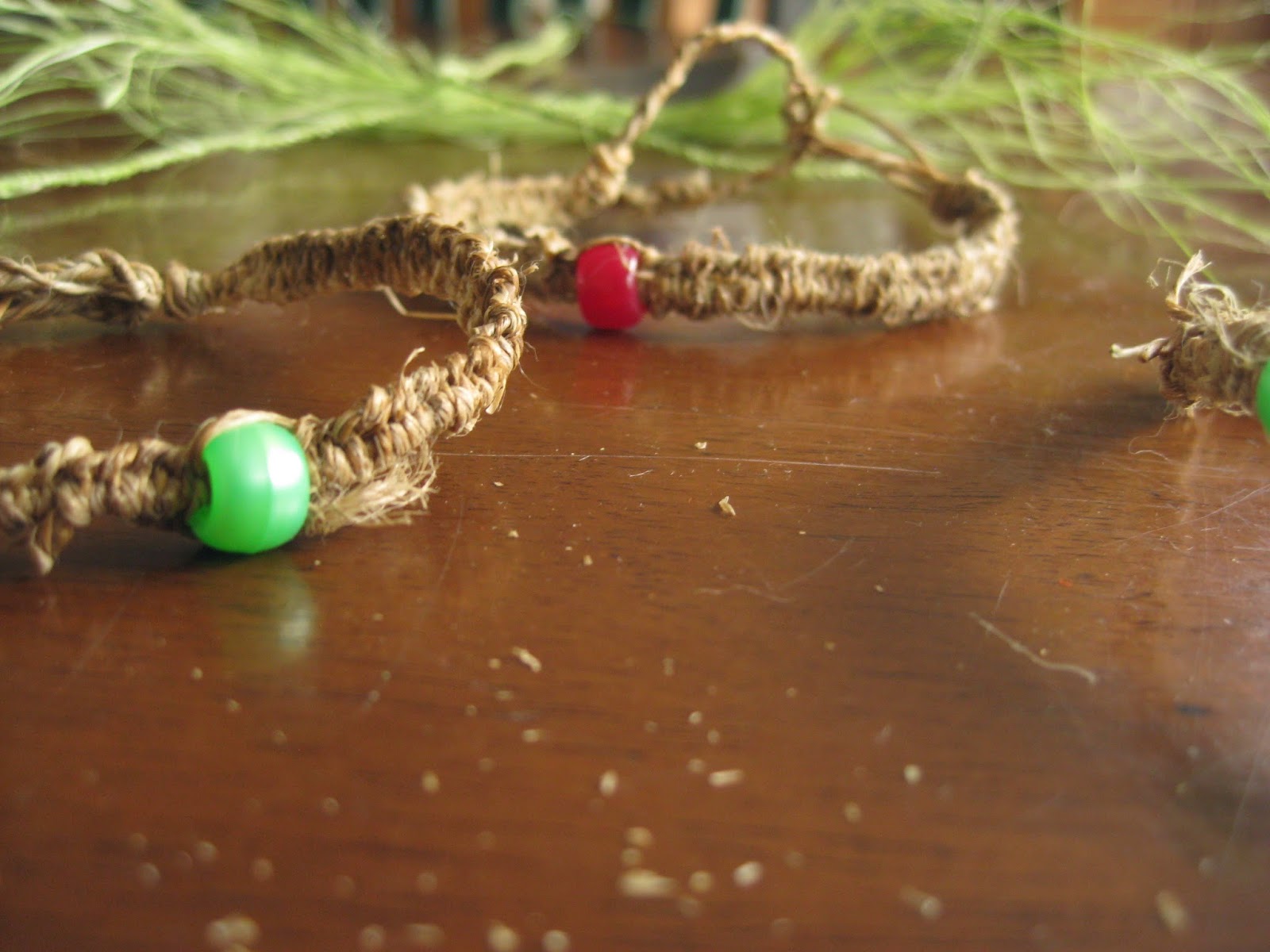 Hemp Bracelets [Made from discarded fibers and found beads] 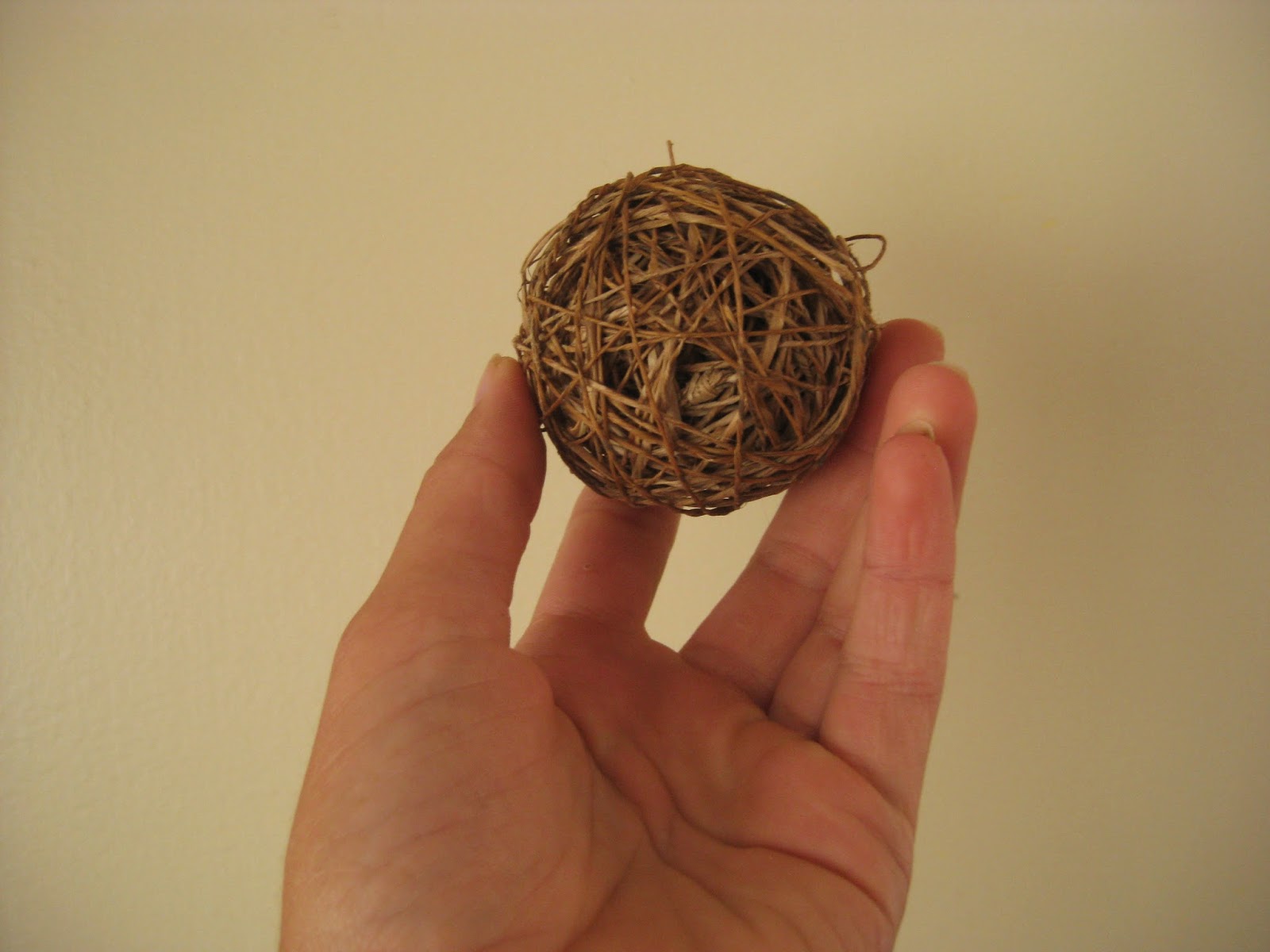 Have a Ball! [Made from Discarded fibers] 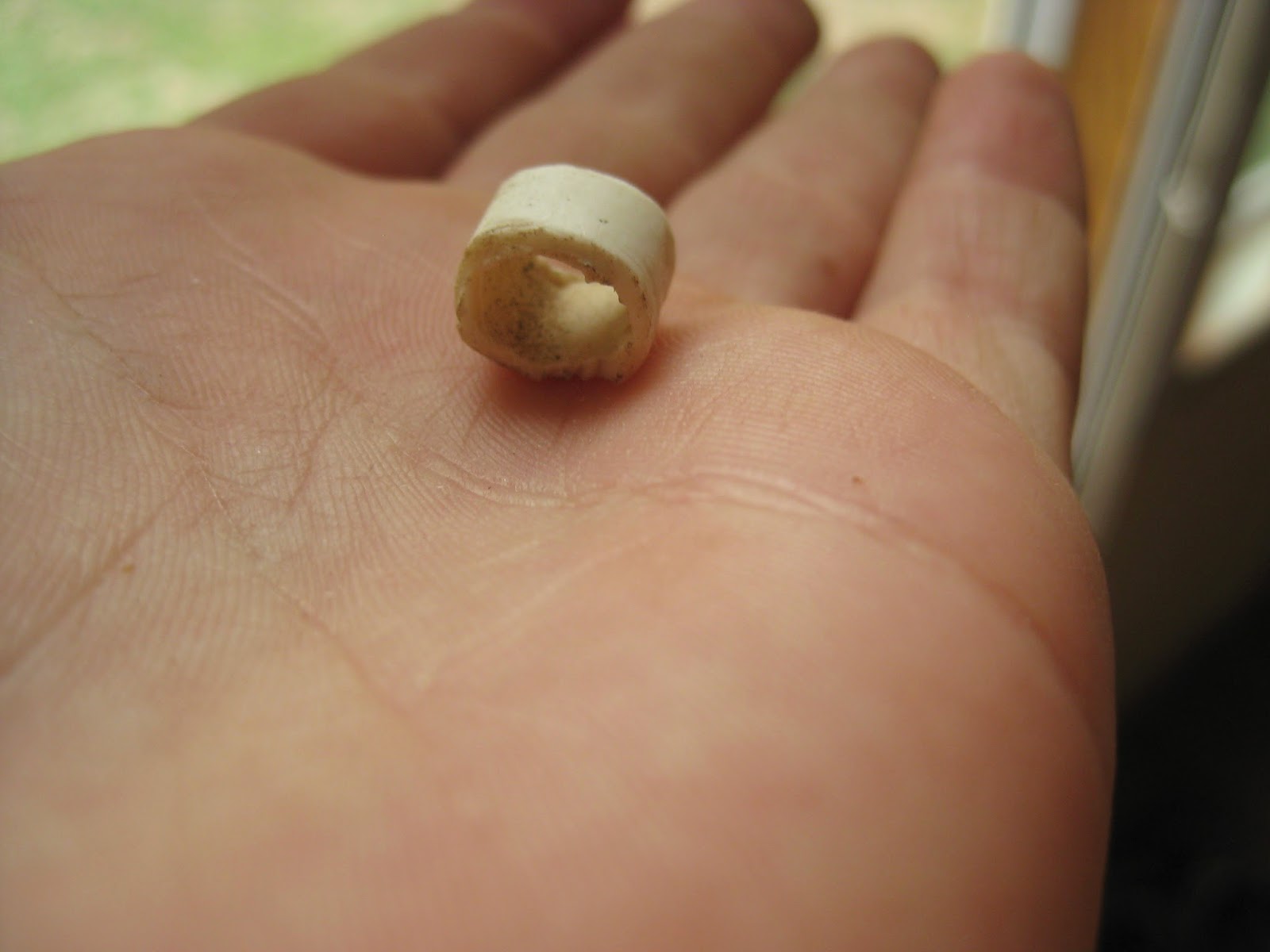 Bird bone, cut with a piece of flint, to be used in yucca bracelet. 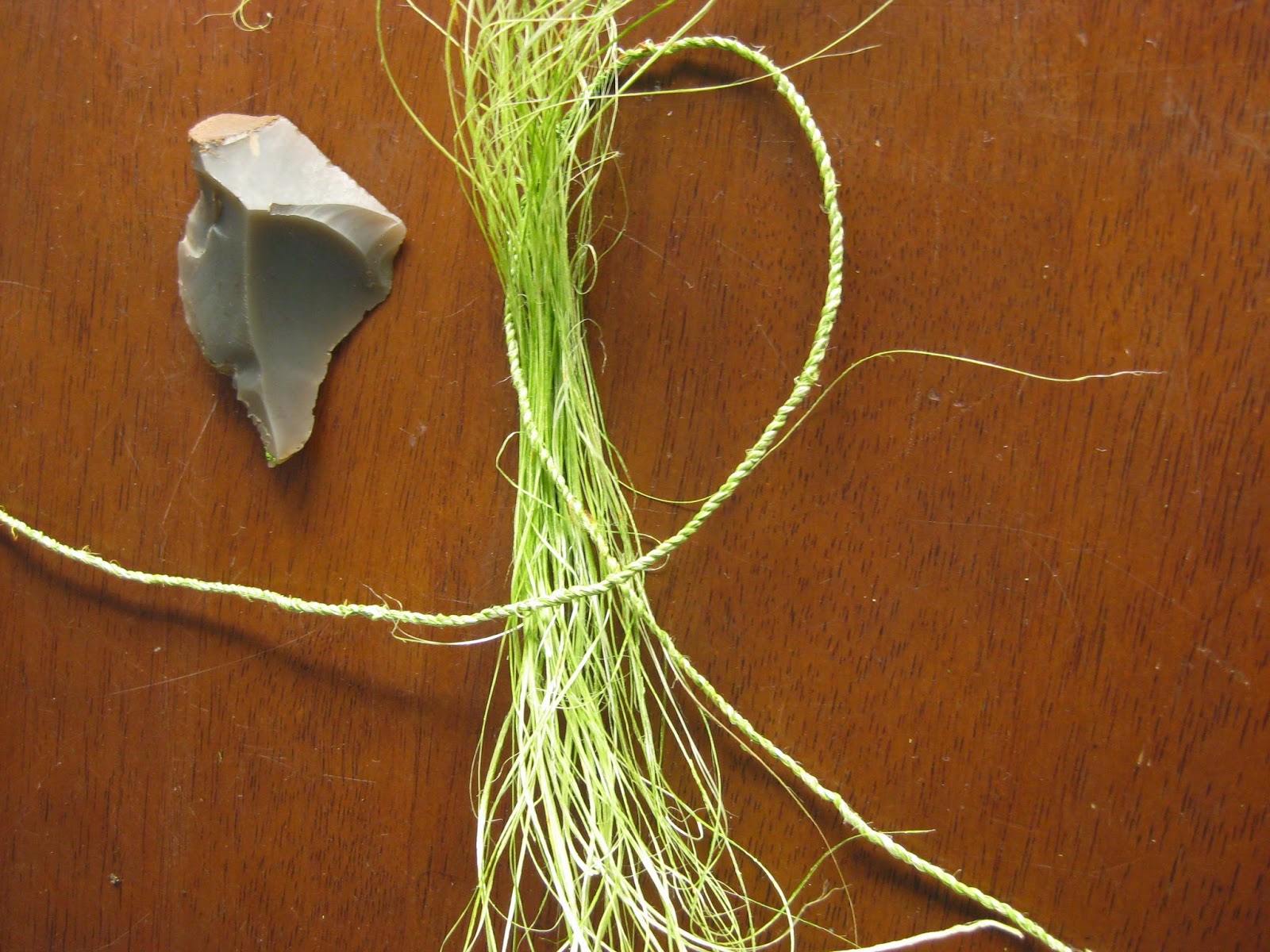