In 2008 I bought a book, on a whim, at a used books store- a monument to creativity and culture. The book was called “Journey Without Maps”. Admittedly, I still have not read it. I believe it currently sits on a dusty shelf in a nearly outdoor library near Thoreau, New Mexico. The library is more frequently inhabited by rats than humans, but it has an incredible collection of nature and native American stories, some dating back to the early 1900’s. I off-loaded the book on the Staff Recommended shelf when I worked there in 2014, and when I last looked in 2018, it was still there, its bright blue cover a contrast to the sepia tones of the rest of the library.

That’s the end of the story of a book I bought and never read, but the point of bringing it up is that I love the title. This morning, I am sitting at a coffee shop in Taos, New Mexico. The sign when you enter the town simple reads “Taos Elevation 6969”. I am eating a cheesy, spicy breakfast burrito from Santa Fe, sipping a “Mexican” mocha in a soda fountain-style mug, and wondering if it’s mere coincidence that my car is the only not white car in a parking lot of over twenty vehicles.

What started this blog was the simple thought that, “if I could only tell my past self that there would be a moment in my life where I’m getting paid to sit in a coffee shop and eat a burrito (granted, I’m supposed to be working, not blogging, but maybe this could be considered a form of professional development), would I feel any comfort in my life choices?” Then I thought about the journey I’ve been on. A journey paved from a certain amount of privilege that I couldn’t even comprehend until recently, and yet fought with a certain amount of hardships, some self-selected, to give me an understanding of grit and perseverance. In the reflection of my computer screen, my necklace gleamed in the sunlight. The Greek Masks- comedy and tragedy, a simple token of appreciation gifted to me by an incredibly committed 5th grade teacher, have become a totem for my journey. I thought about the path I’ve taken, which has been highlighted by some drama in the last seven years, but really, possibly starts with my passion for stage-teching in 5th grade, and the teachers-pet/overachieving mentality that spouted back then. Since then, I’ve taken a journey through life without maps. I suppose there are people who chart their course, and I definitely tried. But my opportunity-seeking attitude took me off course and around the country, and I am so grateful for that.

I’ve been struggling a bit lately, despite or because of all the exciting things on the horizon.  I’ve started some new projects. Home-ownership is a big one, especially since we’re landlords as well. Then some new jobs—one in an entirely new field that I’m apparently pretty good at, and another very familiar job that’s not as rewarding as it used to be. I’ve also started writing again, which is empowering in all the ways I need it to be. That simple glimpse of my reflection this morning was a reminder of my own Journey Without Maps, and that whatever comes to pass, I have a history of experience in navigating through it. 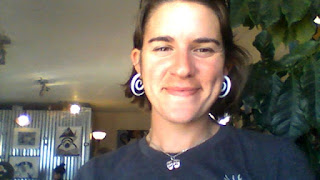